“Arizona’s longest-running nature show,” Verde Canyon Railroad, has long-been an Arizona Treasure, a destination-driver for the entire Verde Valley, and a wellspring of memories for well-over two million passengers who have enjoyed the scenic adventure aboard this historic line since the inaugural run on Friday, November 23, 1990. In November 2020, the Railroad celebrates the 30th anniversary of its beloved “Wilderness Route” which takes passengers across a scenic ribbon of rail running between stunning high-desert red-rock pinnacles and a rare riparian venue along the famous Verde River.

Product first moved along this historic line, called the Verde Valley Railway, in 1912, with a direct correlation to Arizona shedding its territorial background and becoming the nation’s 48th state. Verde Canyon Railroad’s pedigree also harkens to the early days of train travel when iron horses were the newest and quickest mode of transportation to move goods, service and people across the country.  In 2019, the 150th anniversary of the driving of the Golden Spike, which christened the nation’s first Transcontinental Railroad at Promontory, Utah, served as a reminder that until recently, the U.S., and especially the West, was a land of great distances and few roads. Railroads like the Verde Valley Railway, financed by the United Verde Copper Company, connected Clarkdale, Arizona to the cross-country Atchison Topeka and Santa Fe Railway (ATSF), bringing abundant copper harvests from Jerome to the world, and in turn, bringing the world to the remote towns of the Verde Valley.

After the mines closed in 1953, the Verde Valley Railway, nicknamed the “Verde Mix” because it hauled a diverse mixture of people and product, took on a new task of hauling cement and byproducts from the Phoenix Cement Plant in Clarkdale to the new Glen Canyon Dam which created Lake Powell. In 1988, Clarkdale Arizona Central Railroad, owned by Dave Durbano, purchased the railroad from the Santa Fe Railway (once ATSF), sight unseen, based on freight figures alone. After arriving in Clarkdale, Dave was so inspired by the Verde Canyon’s magnificent scenery and the Verde Valley’s mild four-season climate that he and wife Linda were convinced others would want to see this route’s incredible beauty from the comfort of a train.  The notion of an excursion train finally had roots.

With just a handful of midcentury passenger cars and flatcars, fashioned into open-air viewing cars, the train pulled out of the station in 1990 with every seat full for three straight days. The Durbanos felt that they would move about 15,000 people per year into the canyon via the rails, but to their amazement, 44,000 passengers rode the very first year with only word-of-mouth as their megaphone.

The railroad has added and upgraded cars over the past 30 years, and the length of the train has expanded considerably. It now clocks in at a cool quarter mile long from the front of the locomotive to the back of the caboose. Car maintenance and improvements are always at the forefront, as passenger comfort is a signature of Verde Canyon Railroad.  The depot complex also has seen its share of upgrades over 30 years, from its modest beginning in a caboose and a boxcar to the 1997 creation of the southwestern-style depot, Copper Spike Café, Boxcar Gift Store and John Bell Museum. Food and beverage options, both onboard and at the depot, are always rising to meet trends and exceed expectations.

As a cornerstone to Verde Valley tourism, the Railroad always has been a team player in strengthening tourism throughout Northern and Central Arizona communities. “If area businesses work together with a single goal of bringing people to the area for more than just one attraction, one meal, one night’s stay or crowd-pleasing scenery, the entire community can flourish,” said Teresa Propeck, Vice President of Marketing and Passenger Services. In cooperation with other area attractions, chambers, businesses and hotels, Verde Canyon Railroad enhances the visitor experience and the flow of tourism dollars throughout the region.

Another component of the ride for which Verde Canyon Railroad is well known is eagles. As one of the state’s premiere migrating destinations for raptors, including the bald eagle, Verde Canyon Railroad is proud to showcase migrating and resident eagles and waterfowl in this natural environment, only accessible by rail.  The Railroad also is a steadfast and economic supporter of Arizona Game and Fish’s Eagle Watch Program and Liberty Wildlife, Arizona’s premier wildlife rescue agency. Giving back to the community through a kinship with nature has long been a hallmark of Verde Canyon Railroad.

Over the past three decades, the train has expanded in size, employees and special events, but Verde Canyon Railroad has never lost its commitment to preserving, protecting and presenting to the world the rare red-rock riparian wilderness it calls home.

It will always be about the journey! 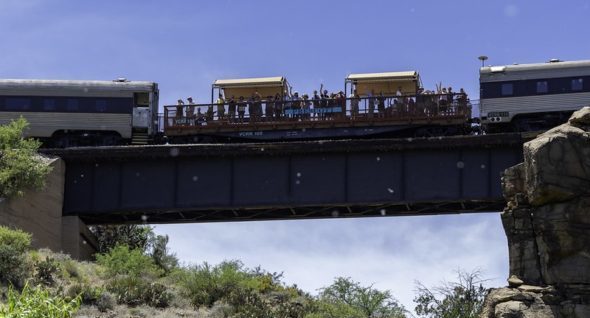 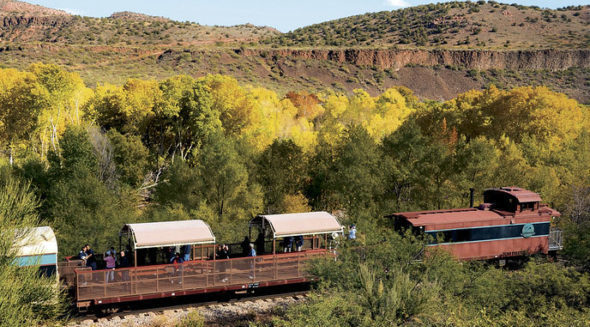