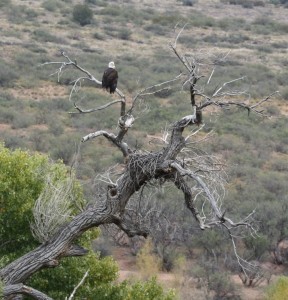 There is no such thing as “growing up on the wrong side of the tracks” when you’re a baby eaglet hatching in Central Arizona’s Verde Canyon. Both sides of Verde Canyon Railroad’s historic tracks afford ample opportunities for young raptors to survive and thrive: plump fish in the perpetually flowing Verde River, ample prey living in the high-desert terrain, and clear skies and mild climate perfect for flight lessons.

Since its 1990s inception, Verde Canyon Railroad has been an active sponsor of the Arizona Game & Fish “Eagle Watch” program which enables “Nest Watchers” to monitor viable eggs and active hatchlings. The watchers provide status reports, maintain vigilance against potential problems and assist in banding eaglets. These valuable volunteers have been crucial to the eagle population increase within the state.

Verde Canyon eagles generally choose precarious cliff ledges and towering riparian trees, both of which exist in abundance along the rails, as their nesting spots. The parent eagles, who mate for life, often return to the same nest for a series of years, creating an easily-recognizable bundle of sticks and branches which grow larger with each winter mating season. Sometimes nests fail due to storms, insects, structural flaws or simply because mated pairs have chosen a different location. The train crew has a keen eye for eagle activity and they are often first to discover new nests taking shape. In recent years, rail passengers have enjoyed observing an active nest high on a red rock pinnacle near the tunnel in the Canyon and another, closer to Clarkdale, in a dead tree.

In December 2015, Verde Canyon Railroad employees noticed something new taking shape in a large, living cottonwood between the tracks and the river a few miles from the train’s Clarkdale depot. With both parents taking part in construction, the raptors and the nest became both readily visible to train passengers during this popular “Eagle Watch” season at Verde Canyon Railroad. Eggs, generally two, are laid in late January and hatch in late February, with young eaglets ready to fledge sometime in May.

Though Verde Canyon is home to resident raptors, the population swells with winter visitors each year, many of whom return to the same beautiful canyon of their birth to begin the cycle anew. Passengers of the Verde Canyon Railroad enjoy a rare glimpse of eagle activity as the train passes through this protected area, closed to all other access during eagle nesting season. For more than 100 years the train has coexisted with the native animals of this treasured landscape and since 1990 has provided a luxurious adventure to nearly two million worldwide visitors.

A treasured bit of history traversing a rare and scenic Arizona wilderness, Verde Canyon Railroad is a fresh view into the unspoiled heart of the West. Postcard-perfect scenery is only part of the magic. The train provides a comfortable and exciting journey as it travels a leisurely four hours from the charming Clarkdale depot to the ghost ranch at Perkinsville and back. Awe-inspiring rock formations, historic trestles, ancient cliff dwellings and soaring raptors are just a few of the trip’s many highlights. The caboose is a luxurious, private car for you and five of your closest friends. First-class cars boast plush seating, complimentary appetizers and a full-service bar. Coach offers vintage Pullman-style seating, panoramic windows and snack bars. Everyone has access to open-air viewing cars offering 360-degree views and spectacular photographic opportunities.

A stone’s throw from the hillside mining town of Jerome, Verde Canyon Railroad’s Clarkdale depot is located in the heart of the Verde Valley, a diverse crossroads featuring amazing adventures in every direction. Only two hours from Phoenix and 25 minutes from Sedona, Verde Canyon Railroad is the perfect Arizona day trip. Reservations are accepted online at verdecanyonrr.com or at 800.293.7245.