The Little Engine That Did. Verde Canyon Railroad.

Along with the State of Arizona, Verde Canyon Railroad celebrated its centennial anniversary in 2012. As the Railroad shifts into its next 100 years of rail service, it is still significant to reflect on the journey that brought them to this celebratory juncture.

It all started in the tiny town of Jerome, Arizona that clings to a steep-angled mountainside two thousand feet above the valley floor. There is nothing easy or accessible about Jerome, yet during its heyday, over 15,000 residents called this vertical burg their home. They were here for the mines, which through the decades, churned out a billion dollars worth of gaudy ore. It was the wealth of the mines that lured them but it was the railroad that brought them.

The railroads were the arteries that conquered the unforgiving landscape and fed the communities of the Verde Valley. While the mines have been closed over half a century, the Railroad continues to be an economic engine for the region.

In 1895, the first track laid directly into Jerome was the United Verde & Pacific Railway, which originated from Jerome Junction near Chino Valley. With 186 curves on the short 26-mile narrow gauge stretch, the Railroad became known as the crookedest line in the world. The builder, William Andrews Clark, also owned United Verde Copper Company and would continue to leave his indelible imprint on the area, including a town with his namesake.

The shift from underground to open pit mining led to a complete restructuring of Jerome and the surrounding area. Construction of a new smelter began on the valley floor and on an entirely new town. Clarkdale — named after William Andrews Clark — was Arizona’s first company town and designed with precision planning and technological advancements far from the norm in the early 1900s. The community of sturdy brick homes included modern conveniences such as electricity, sewer and copper piping.

In 1911 Clark financed construction of the Verde Valley Railroad, a 38-mile standard gauge line from Clarkdale to Drake. It took 250 men using picks, shovels and DuPont black powder one year to complete the task. It was an astonishing feat considering that the line included a 680-foot tunnel carved through a mountain and a trestle spanning a 175-foot gorge aptly named S.O.B. Canyon.

Verde Valley Railroad proved to be a workhorse, continuing to haul passengers and freight even after the mines closed. In 1988 Dave Durbano purchased the line. On his first ride through the unspoiled wilderness, he knew that this was a treasure, both scenic and historic, that must be preserved. Verde Canyon Railroad was born.

The first excursion train of the Verde Canyon Railroad rolled out of the Clarkdale depot on November 23, 1990. It carried neither freight nor ore, only people. They were not seeking a better way of life, but the beauty of a wild river-carved canyon where eagles nest among high cliffs and wind makes music in the cottonwoods. Along the way they hoped to catch a glimmer of the ones who came before, whose perseverance, vision and hard work made it all possible. That’s what a railroad is: not just lengths of iron linking one place to another, but a symbolic connection of the past to the present.

Today people travel from all over the world to ride the rails into the Verde Canyon — an average of 90,000 people per year. They come to experience the sights and to revel in the casual elegance of train travel as they discover the heritage of the landscape. It’s a journey worth taking. It is the scenery that lures them but it is the Railroad that still brings them … because it’s always a good day when you’re on a train. 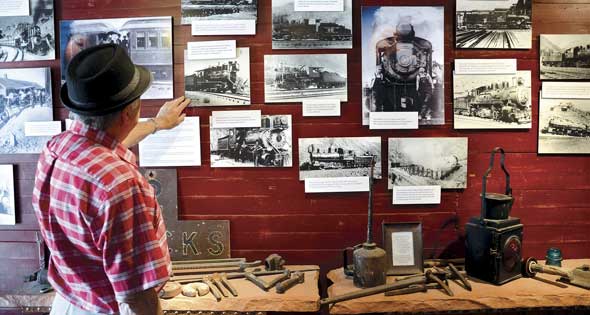 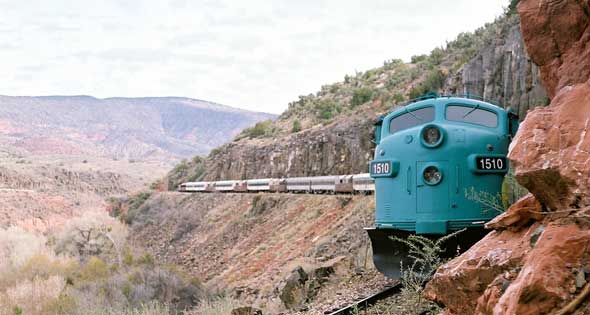